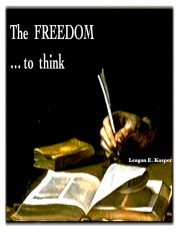 New York City, August 24, 2015 (Newswire.com) -  She is funny, stupendously so, as we have come to learn through each of her books in which humor is never left behind, even if it involves a romantic epic filled with poetic eroticism, evident in her critically acclaimed novel LOVE. Her humor doesn't come unnoticed during the intriguing dialogue of three scientists in Surviving Pan, solving the mysteries of history and mythologies, either. With a keen eye for the smallest details, Kasper shared her canny observations about men's features and what they reveal about men's personalities in her insightful and thigh-slapping humorous dating guide for women, Sensing Mr. Right Guy. In her latest endeavor, The Freedom to Think, we get to know the real Leagan Kasper, previously hiding behind the fictional characters of her books.

A fearless, bold and cerebral investigative researcher comes to view in The Freedom to think, not afraid to take on subjects few dare to write about, let alone question. Kasper questions everything and doing so encourages us to think, supplying the reader with incisive arguments against a generally believed and publicized status quo of world matters, including what really happened in Benghazi.

"I will remember that there is "art" to medicine as well as science, and that warmth, sympathy, and understanding may outweigh the surgeon's knife or the chemist's drug".

Racists are forced to acknowledge their ignorance regarding their own gene pole and heritage, while Politicians provided Kasper with the true barbarian state of their minds, ignorance and misconceptions through their very own voting records. Questioning if the  Holocaust truly took place in Germany, (that it took place leaves no doubt in The Freedom to think)  may well be the most unpopular subject in the western world, but not when able to provide authentic documents showing a very different side to what actually occurred, leaving readers baffled to contemplate how easily the world is led astray. Psychiatric diagnostic manuals are carefully examined to show how feather brained many Psychiatrists are, having the audacity to diagnose perfectly healthy human beings with a mental disorder. Inventing Autism, not found in Diagnostic manuals of the 1940s, 1950s, 1960's, 1970's, 1980's, to trick parents into having their children diagnosed with a made-up disorder associated with Einstein to make their children appear above average smart, at the same time receiving a life long label of a mental disorder never to be erased from their medical record.

Astutely Kasper explains how bee keepers caused bees to become sick and the relation of bees to humans, suffering the same disease from which bees are suffering in the western world. Finally the author lures readers to take a close look into the mirror to acknowledge how the liberal minded abominate the right of Religious worship in foreign countries, while our Constitution gives everyone on U.S. soil the right to worship according to their Religion, even living a life of celibacy amongst women, dressed similar to religious Muslims covering their bodies, as in the case of Catholic nuns. If voluntarily wishing to abide by the strictest Religious rules, the safest country to practice ones Religion is the Unites States.

The Freedom to think is a crucial and paramount read leading us a step forward into a future, encouraging us to think for ourselves.

Book Title: The Freedom to think