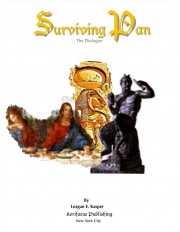 Jesus was God Pan and Pan was undoubtedly Cronus, the father of the Olympians, discloses Book.

New York City, August 12, 2015 (Newswire.com) - ​ That the word Cronus means crown and Jesus, the Christ, referred to being the crowned one is only the first realization one gathers through the dialogue between three scientists in Surviving Pan - a savvy little book by author Leagan Kasper providing the reader with more perspicacity than a book of one thousand or more pages. The author gets right to the point of divulging the secrets hidden in art, their meanings and the lingual blunders of wrongly spelled words ( Vitruvian instead of Virtuvian suggesting a Virtuous man) using fictional characters portraying the three scientists -  Psychiatrist,  Paleontologist and Ethnologist  - providing each with a unique personality causing the dialogue to be alive while passionately debating their favorite subject, leading to unforeseen revelations.

In Surviving Pan one discovers a very different Leagan E. Kasper whose more well known works, Love, and her recent dating guide for women, Sensing Mr. Right Guy, lead us to believe her main focal points are sensual journeys of humanity's souls and minds, while encompassing the author's vivacious humor. In Surviving Pan one easily forgets that Azdan the Psychiatrist, Sadu the Paleontologist and Laila the Ethnologist are none-existent fictional persons disclosing the Author's sagacious knowledge of Renaissance art, languages, etymology, expressions, metaphors and allegories, science and mythologies. A true Renaissance woman misplaced into the 21st century making a fool of us for not having been able to see the obvious in simple words, while we're fixated on inaccurate explanations allowing Religions to cause divisions instead of enlightening us with the science allegorically disclosed in the Bible's creation story, plainly and intelligently clarified in Surviving Pan.

"A knife depicted in art may be a metaphor for many things but in the Judicial language, which I totally forgot about, it stands for the German word " Messer" and the word Messer means two things. One, it's a knife and two a Messer is someone who ' measures ', evaluates a person, a person who judges. A knife in art using judicial encodings is always depicted in the hand of the Judge", suggested Laila

Yet even in this more serious work by Kasper she never fails to add humor, just as we've come to ponder deeply over newly disclosed revelations, humanizing solemn moments to keep it light.